Let's do the Time Warp again... 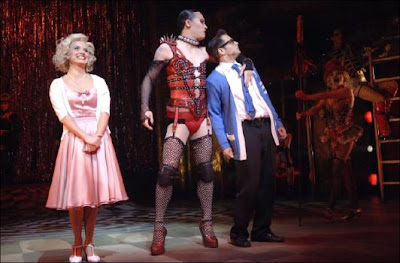 The Rocky Horror Show is so good I've now seen it twice, the first time on opening night, and again just last night. The magnificent iOTA was born to play the 'sweet transvestite' Dr Frank'n'Furter, and Paul Capsis makes a suitably manic and malevolent Riff Raff. On opening night, the role of the narrator was performed by Derryn Hinch; thankfully last night's show was someone brand new, and much better; ditto last night's stand-in Rocky, who unlike his predecessor could both sing and act, as well as flex his muscles.

The simple but effective set design evokes a tattered and fading theatre (appropriate for this rock homage to 50s horror and SF B-movies), striking costumes riff on the designs we're all familiar with from the film, and the tongue-in-cheek perversity of the show's central conceit stands up well despite the passing of time. Raunchy, rollicking good fun.

Posted by richardwatts at 3:13 pm

Don't tease! Who's the new Hunch?

And what if I told you I was related to the guy who plays Brad?